John 20: 18 “Mary Magdalene went and announced to the disciples, “I have seen the Lord”.

‘Christ is risen! He is risen indeed!’ This is the joyous chorus Christians across the world sing out at Easter. Whether that chorus is heard at sunrise, in churches, or virtually at home, the truth remains that Jesus rose from the dead. When Mary Magdalene told the disciples that she had seen the Lord, it was only the beginning. As they came to understand that the powers of sin and death were overcome by the resurrection of Jesus, they began to spread the good news. But, on the that first Easter morning, they were still in a state of wonder, confusion, and hope. They were still edging their way into Easter.

We can probably relate to that feeling. The pandemic is not over, even though we see an end in sight. The vaccine roll-out has begun, but has a way to go. We are getting closer to getting back to normal, but we are not there yet. Despite everything we’ve gone through over the year, we move forward in hope. For people of faith, it’s a belief in the Risen Christ and the new life he brings that keeps us edging into Easter with hope, so that we too can say “I have seen the Lord”. Thanks be to God. 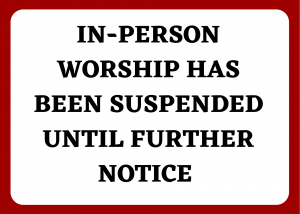