“Who do you think you are?”

“By what authority are you doing these things and who gave you this authority?” Matthew 21: 23

This was a question the religious leaders asked of Jesus when he was teaching the people new ways of having a relationship with God. They wondered who in the world did Jesus think he was. Jesus had challenged the status quo with calls to care for the poor, freedom for the captives, and an invitation to ALL people into God’s kingdom. This did not go over well by those who adhered to certain rule and laws that were not to be challenged.

The religious elite of the day were like one of those jokes about changing a light bulb. “How many Presbyterians does it take to change a light bulb? Four: one to change the bulb and three to talk about how good the old bulb was.” How easy it is for us to get stuck in a rut of what has always been and quickly reject new ways of looking at the world, especially God’s way of looking at the world. As Christians though, to be authentic followers of Jesus, that is exactly what we are called to do.

We are called to critically consider the systems and practices that we fall into that do not honour God or each other. We are called to question the authorities of the world when they don’t uphold the dignity of all people. We are called” to do justice, and to love kindness, and to walk humbly with our God” (Micah 6:8). This is who we are. Thanks be to God. 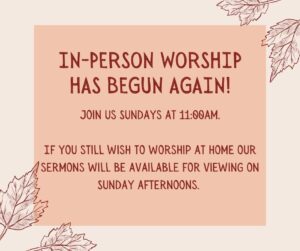